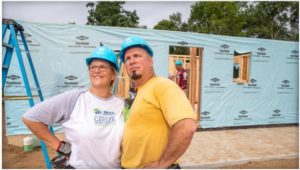 Though the couple are country music royalty, their work with Habitat for Humanity is far more than just a photo opportunity. Brooks and Yearwood roll up their sleeves just like everyone else each time they volunteer with the organization to build homes for those in need. The singers partnered with the organization in 2007, and they first helped build homes in 2008 after Hurricane Katrina. Read More