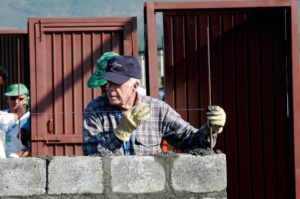 Two weeks ago, several thousand people gathered in St. Joseph’s County, Indiana for Habitat for Humanity’s 35th Annual Jimmy and Rosalynn Carter Work Project. Since 1984, the Carter Build, as it is known, has drawn nearly 100,000 committed volunteers and built 4,000 homes in 14 countries around the world. According to Jonathan Reckford, CEO of Habitat for Humanity, the Build annually reinforces Habitat’s vision of using home construction to bring communities together and jointly plan for their shared future. It is also an inspiring reminder of the extraordinary personal integrity and servant leadership practiced by President and Mrs. Carter.

Habitat for Humanity is one of the most strategic and innovative organizations anywhere in the world. It is able to deploy innovations, new technologies and armies of volunteers to homes and communities around the world with little push back or financial incentives. It is a better model for community and economic development agencies to emulate than expensive tax cuts or large public grant programs.

When we think of innovation in the housing sector, we often think of Silicon Valley startups or financial engineering by greedy mortgage bankers. But in 2016, after years of experimentation, Habitat launched the Terwilliger Center for Innovation in Shelter to be an in-house venture fund for new technologies in roofing, home energy solutions, home sanitation and other areas that could benefit Habitat homes. Habitat uses its volunteer construction programs around the world as proof of concept sites for new technologies it develops or identifies. A recent example is its success is the construction of five “Net Zero” homes, which use a thin solar panel film to collect energy that costs the same as traditional panels. In addition, Habitat-issued mortgages now include solar-energy equipment costs, rather than pricing them separately as utilities. Other home builders and mortgage lenders have since copied this approach.

Habitat has always been a global leader in the “science” of volunteer management. The organization is supported by 2.5 million volunteers annually worldwide. These volunteers often devote weeks, or multiple weekends of hard labor to build homes, procure materials and comply with local zoning rules. Non-profits around the world – the vast majority of whom rely on volunteers, can learn a lot on the way that Habitat organizes its volunteers at builds and within communities. According to Reckford, Habitat believes that its most effective social change strategy is to engage its volunteers, and not necessarily the construction of homes.

Habitat plans extensively in advance of its builds to ensure that its volunteers have a great experience, are properly on-ramped to a Habitat build, and have all the same tools that employees do – including job descriptions, learning tools, technical support and a sense of community. When you arrive at a Habitat build, you often see the foundation laid, the materials stacked with instructions, and clear instructions for the layperson to follow. Often just a few days later – a functional house is complete and inhabitable.

The importance of impactful organizations like Habitat is increasing in today’s America. The social and health problems caused by disintegrating communities and a lack of affordable housing are among America’s greatest challenges. In many of our largest cities, working families can barely afford to rent apartments, and it estimated that 19 million American families are cost-burdened by their housing situation.

Habitat will launch efforts later this year around housing advocacy and solutions to increasing the supply of homes in America. Secondly, Habitat is leading dialogues at the national, state and local level around inclusive neighborhood revitalization. This is important at a time when Washington seems to be following an economic growth plan driven primarily by tax cuts. While tax cuts are one tool, they do not replace the tough, long-term work of community building and finding ways to revitalize neighborhoods without displacing long-time residents. It would be nice to see more of the compassion of Habitat in the debates about inequality and social cohesion.

I am the CEO of Equal Innovation, a firm that consults with leading universities, governments, foundations and companies to assist them with innovation, entrepreneurship and philanthropic strategies. I also am a Senior Fellow with the Center for American Progress and the author of the “The India-US Partnership: $1 Trillion By 2030” by Oxford University Press. Follow me @nishacharya. I previously served as Director of Innovation & Entrepreneurship and Senior Advisor to the Secretary of Commerce for the Obama Administration, and as Executive Director of the Deshpande Foundation, a prominent American philanthropy focused on innovation, entrepreneurship and scalability around the world.