President and Mrs. Carter to bring their Habitat for Humanity work project to the Music City in 2019 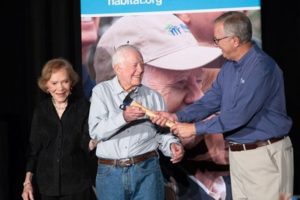 SOUTH BEND, Ind., Sept. 4, 2018 /PRNewswire/ — Just hours after hanging up their tool belts at the completion of the 35th Jimmy & Rosalynn Carter Work Project in Indiana, the former president and first lady announced they will take their work project to Nashville, Tennessee in October 2019.

“It is such an honor to host a former President of the United States and his wife, especially such a notable couple who have done so much humanitarian work on behalf of affordable homeownership, not just in the United States but around the world,” said Danny Herron, president and CEO of Habitat for Humanity of Greater Nashville. “We are excited about the opportunity to work alongside the Carters, hundreds of volunteers who may be visiting Nashville for the first time, and all of the future homeowners.”

In Indiana, President and Mrs. Carter worked alongside future homeowners and hundreds of volunteers to build 22 new, affordable homes in Mishawaka. With additional construction projects throughout the year, a total of 41 homes will be built, renovated or repaired in Mishawaka and South Bend as part of the 2018 Carter Work Project.

“After 35 years, no one would question if President and Mrs. Carter wanted to take a break from the build site. But the words ‘Carter’ and ‘retire’ aren’t even in the same vocabulary,” said Trisha Yearwood, who, with her husband Garth Brooks, has volunteered with Habitat alongside President and Mrs. Carter for over a decade. “Everyone deserves a decent place to live, but not everyone can afford it. That’s true in our town too, which is why we’re so excited to give a big Nashville welcome to the Carters.”

Photos of this year’s build, and photos and videos of previous Carter Work Projects are available at www.habitat.ngo/CWPphotos.

“President and Mrs. Carter know the cause of affordable housing is only becoming more urgent, and so we are so grateful they will once again mobilize hundreds of hands and thousands more voices to this cause,” said Jonathan Reckford, CEO of Habitat for Humanity International. “Through the 2019 Carter Work Project, President and Mrs. Carter will shine the light on not only Nashville, but our country’s struggle to address the real challenges facing the families who cannot afford safe and decent housing in their communities.”

Since 1984, President and Mrs. Carter have traveled around the world with Habitat to build and improve homes. Their time and efforts help to raise awareness of the critical need for affordable homeownership around the world. For 35 years, President and Mrs. Carter have worked alongside more than 103,000 volunteers in 14 countries to help build, renovate or repair 4,331 homes.

About Habitat for Humanity

Driven by the vision that everyone needs a decent place to live, Habitat for Humanity began in 1976 as a grassroots effort on a community farm in southern Georgia. The Christian housing organization has since grown to become a leading global nonprofit working in local communities across all 50 states in the U.S. and in more than 70 countries. Families and individuals in need of a hand up partner with Habitat for Humanity to build or improve a place they can call home. Habitat homeowners help build their own homes alongside volunteers and pay an affordable mortgage. Through financial support, volunteering or adding a voice to support affordable housing, everyone can help families achieve the strength, stability and self-reliance they need to build better lives for themselves. Through shelter, we empower. To learn more, visit habitat.org.

About Habitat for Humanity of Greater Nashville