The Rental Housing Crisis Is a Rural Issue Too 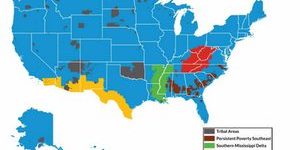 Much like urban communities, rural communities also face critical housing issues like rental shortages, a lack of federal and private funding to build new units, and the impending loss of affordability restrictions. Here’s what could help.

Amid all the talk of a national housing crisis, rural communities are likely to go unmentioned. It’s often assumed that rural communities and small towns have lots of land and homes to spare—about 75 to 80 percent of land in the U.S. is rural, but only 15 to 20 percent of the population lives in rural areas.

But rural communities are actually quite diverse. Some communities are growing, facing a supply squeeze and rising housing costs as new residents who can afford to spend more on housing move in. Other communities are stable, but a small change—gaining or losing a business or industry, a few dozen housing units, or a health services facility—could send housing prices spiraling up or down. In communities that are experiencing population loss, incomes may be too low for property owners to adequately reinvest in the existing housing supply.

Almost 3 out of every 4 rural homes is owner-occupied, leaving about 1 out of every 4 available for rent. While not necessarily a problem everywhere, in some communities those available rental units may be fully occupied, leaving no room for new renters. For instance, in rural parts of Randolph County, Georgia, that are eligible for U.S. Department of Agriculture (USDA) housing programs, all rental units were filled by existing households, according to data from the 2010-2014 American Community Survey. In 2014, this was more common in the western and southern regions of the U.S.

Low supply can contribute to higher rates of doubling up or overcrowding, particularly among Hispanic and Native American populations. For example, in parts of Oglala Lakota County, South Dakota, more than 1 in 4 households—whether renting or owning—live in housing with more than one person per room. Overcrowding can suggest that too few housing units are available in a community, or that units are inadequate for larger, and often multigenerational, households.

Such tight housing markets can leave individuals and families in the lurch when they move to a new community but find no rental housing available to meet their needs. It also makes life difficult for employers who are trying to expand their workforce. Severe housing deficits can keep both business and residents away.

In many rural places, it is hard to build more rental housing even when it’s needed. There is a national shortage of construction labor, linked to employment declines in this sector after the last recession. Builders are also facing material shortages and associated cost increases. Even if there weren’t shortages, much of this would need to be brought into rural communities from other places, driving up transportation costs. Land may also not be available—a community may be located in a valley that is already built up and surrounded by mountains, or subject to flooding, or ownership may be historically tied up in the hands of a few families or companies. Even if land, labor, and materials were not an issue, not all places have capable developers able to raise construction funding and oversee the development process, or property managers to run the rental property when it comes online. Finding funding, particularly to build new rural rentals with low-cost rents, can be especially difficult.

Given the low number of rental units available in rural communities, those subsidized through federal financing and operating support are a critical source of supply. This includes rental units funded through congressional appropriations, capital advances, direct loans, loan guarantees, and tax credits—all of which allow property owners to charge cheaper rents—and varying types of rental assistance attached to particular units to help pay the rent for tenants who need extra help. Yet many affordable rental loan and capital finance programs only get maintenance and rental assistance funding for existing units and not new units (e.g., public housing, project-based Section 8). Other programs could build more units but haven’t received funding to do so for 10 or more years, including USDA Section 515 Rural Rental Housing direct loans and Section 521 rental assistance, and the U.S. Department of Housing and Urban Development’s Section 202 Housing for the Elderly, which provides a capital advance and rental assistance for age-restricted rentals.

The Low-Income Housing Tax Credit (LIHTC) program is the only major federal program still available for rural communities that need more affordable rental housing. (The National Housing Trust Fund can also finance affordable rentals in rural communities but has only been funded for three years so far at a total of only $637 million spread across every state and territory). As of 2017, less than 1 out of every 3 LIHTC-financed projects was located in nonmetropolitan census tracts, but only represented 1 out of every 6 units funded nationally, or about 380,000 units. In some rural counties, LIHTC has an outsized impact on the availability of rental housing. In a recent study we conducted at the Urban Institute, where we work as researchers, we found that LIHTC funded more than 1 of every 10 rental units in 51 nonmetropolitan counties, while other counties had lower rates. While a small number of counties, this highlights how critical LIHTC funding can be for increasing and preserving the rural rental stock where units may otherwise be hard to build, particularly at low rents. Yet this program can be difficult for rural projects to access. They must compete against urban projects in their state, which serve more people and may better meet other funding criteria, such as being located near transit or grocery stores. LIHTC also generally requires that projects have a large number of units to make financing worthwhile, when many rural communities may only need a few units to meet their needs. Finally, investors may provide lower amounts of equity per dollar of tax credit toward rural LIHTC projects due to perceptions of increased risk, which means resulting rents may not be as low as needed. All of these factors could mean that LIHTC only works well in some rural communities, although this has not been systematically studied.

There is a Rental Housing Preservation Crisis

Federally assisted rural housing units are aging and in desperate need of rehabilitation, but there are almost no resources to do so. Nationally, public housing has faced persistent underfunding and deferred maintenance. Only recently has this become a visible crisis in rural America. The demolition of about 280 public housing apartments in Cairo, Illinois, and the recent closure of two more properties in the neighboring village of Thebes, shows how extreme negligence and mismanagement of funds can cost small communities their only affordable rental housing. Both towns were within the jurisdiction of the Alexander County Housing Authority, which was placed under HUD receivership in 2016. HUD decided to demolish rather than renovate these critical units, displacing about 500 families across the two communities, with many having to move up to an hour away. Rural residents can be forced to leave their hometowns when properties close and no other rental options exist locally.

USDA recently estimated that through the year 2035, its more than 400,000 remaining rental units will accrue almost $5.6 billion in unmet capital needs if no action is taken. Meanwhile, many of these properties are scheduled to pay off their final USDA mortgage and lose their affordability restrictions: around 1,800 units will be lost each year through 2027, and then up to 92,000 units every four to five years after that until all the units are gone. Once this happens, these rentals no longer have to remain affordable, and owners can do want they want with the property, including increasing rents to market rate or selling the property for redevelopment.

Despite this growing crisis, USDA’s rental housing preservation program—the Multifamily Preservation and Revitalization Demonstration program—helped renovate fewer than 25,000 units over its first 10 years and is not funded sufficiently to scale up. While LIHTC has helped preserve almost 200,000 rural units to date, this also represents valuable funding that could have been used to produce new units where need is growing.

We Need a Comprehensive, Coordinated Commitment

Much of the attention today is focused on the urban housing crisis. Yet lack of housing, rising rents, displacement, and homelessness are rural issues too. We need an increase in public funding, both capital and operating supports, as well as better allocating of these resources toward the greatest rural rental housing needs. This could be done in a more coordinated way by USDA and HUD if they jointly identified where their financed housing is in jeopardy and worked together to leverage their resources to (re)invest in the most vulnerable communities with the greatest needs.

More private investments are also needed. There is some promise of private financial innovations motivated by Fannie Mae and Freddie Mac’s recent Duty to Serve plans for rural housing, preservation, and manufactured housing. These include piloting new loan products to support rural single-family rentals and resident-owned manufactured home communities, improving access to loans on Native American lands, and partnering with public housing authorities on preservation needs. Regional community development financial institutions could also create and/or manage pooled funds to make larger-scale investments in rural rental housing while sharing the risk across investors. This could build on lessons being learned through the Uplift America Fund, supported by USDA Rural Development loans and grants, and philanthropic partners, to invest in rural community infrastructure. This would require additional public and private resources specifically for housing investments, however.

Rural communities need to be empowered to think through their housing needs and to take action. This includes re-envisioning what rural housing should look like and where it should be, and creating a menu of options to meet the needs of existing and future residents. Existing rural regional planning processes, such as Stronger Economic Together supported by USDA through Cooperative Extension Services, could incorporate a more explicit inventory of housing assets, needs, and solutions as part of the strategy for growing local economic development. More capacity is also needed to defend against displacement and preserve existing units, as well as to build new ones. If local plans and increased capacity could be brought together with real resources and commitments, rural rental housing might not face such risks in the future.

Disclaimer: These views are our own and should not be attributed to the Urban Institute, its trustees, or its funders.